Provence, a land rich in olive trees, vineyards and garrigue, remains a major tourist destination. For visitors in search of authenticity and the songs of cicadas.

Marc and Sarah, who are both lovers and locals of this splendid “country”, make it a point of honour to ensure that the curious from all over the world encounter Provence and St Rémy in the best conditions. In their fabulous loft’house, entirely renovated…

House to rent with swimming pool in Saint Rémy de Provence : 6 rooms for friends and family

In the middle of summer, from June to September, the independent house is offered entirely for seasonal rental. Its private biological swimming pool, its garden with trees and flowers, its 6 private rooms and 6 bathrooms, usually designed for bed and breakfast, are then combined to welcome entire families in one place.

When you travel together like this, you want to feel at home. And every day you feel the sweet smell of holiday and light.

Our two alchemist hosts, Marc and Sarah, have found this perfect compromise through a series of inspirations and arrangements, each more surprising than the last. So much so that many of the temporary inhabitants of the M&S loft/mas find themselves, as soon as they enter the premises, as if in a place they already know. What if this is comfort?

So for those of you who are looking for a house with a swimming pool to rent in Saint Rémy de Provence, click and make your reservation in this place full of history… 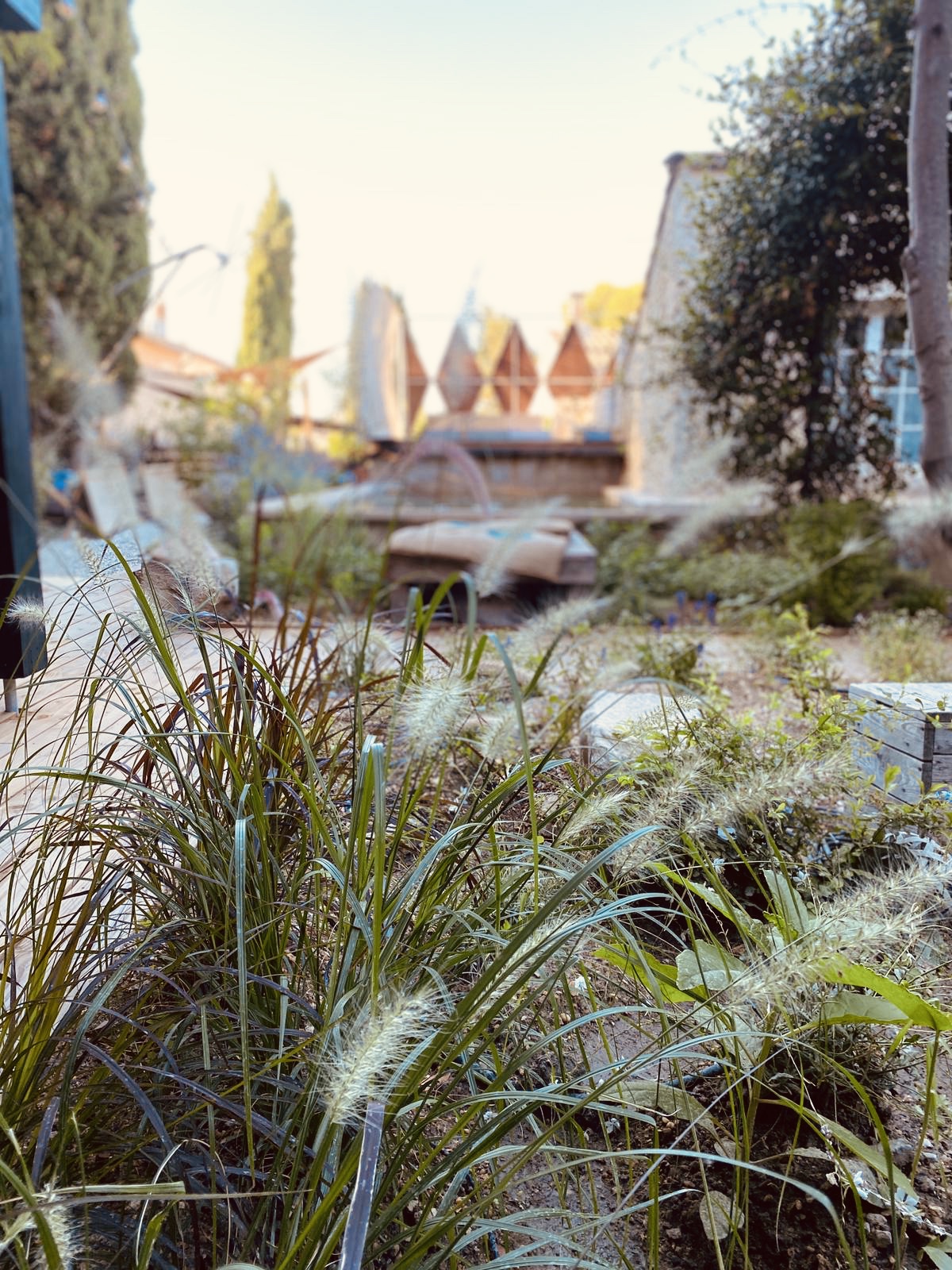 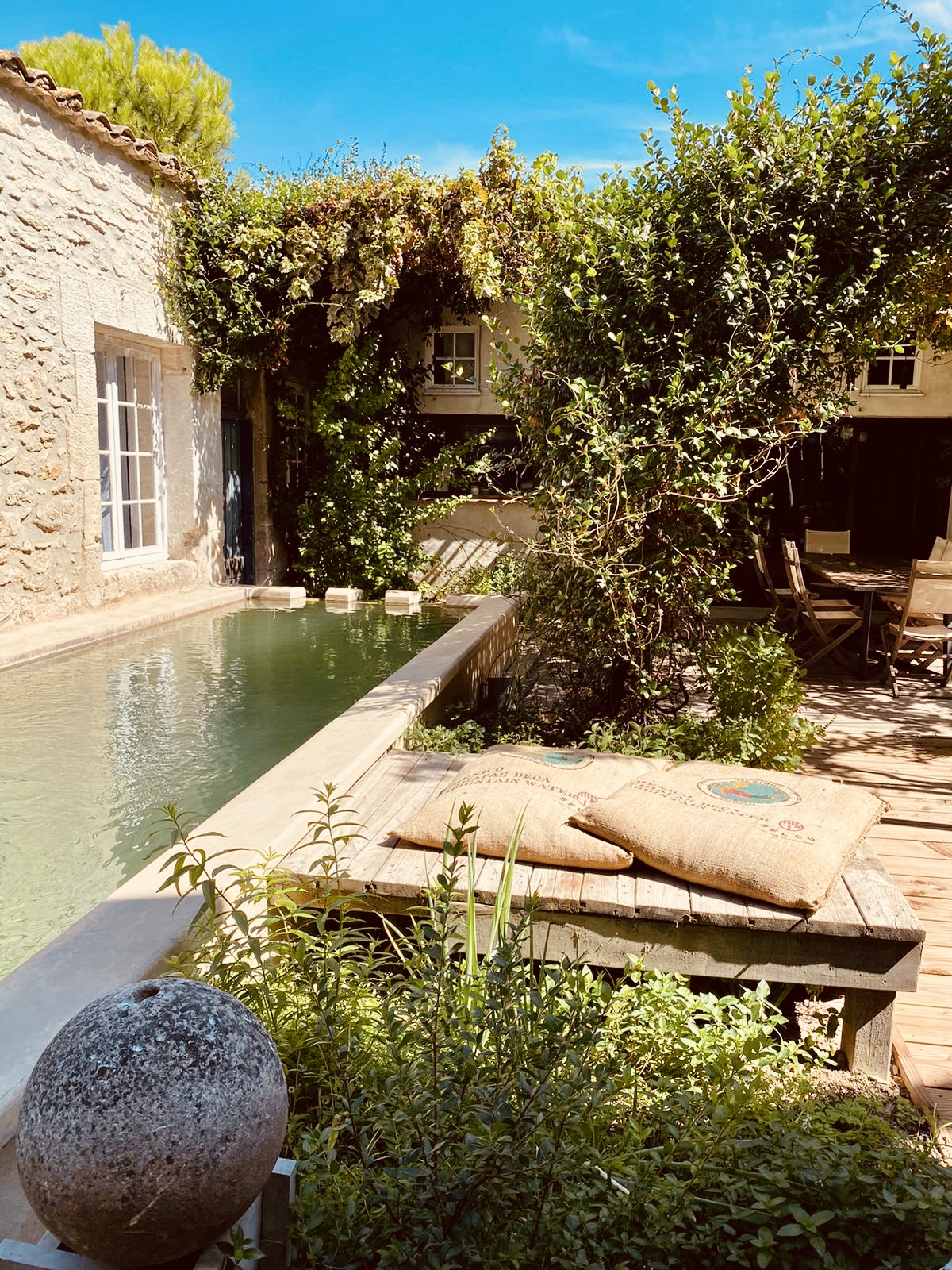 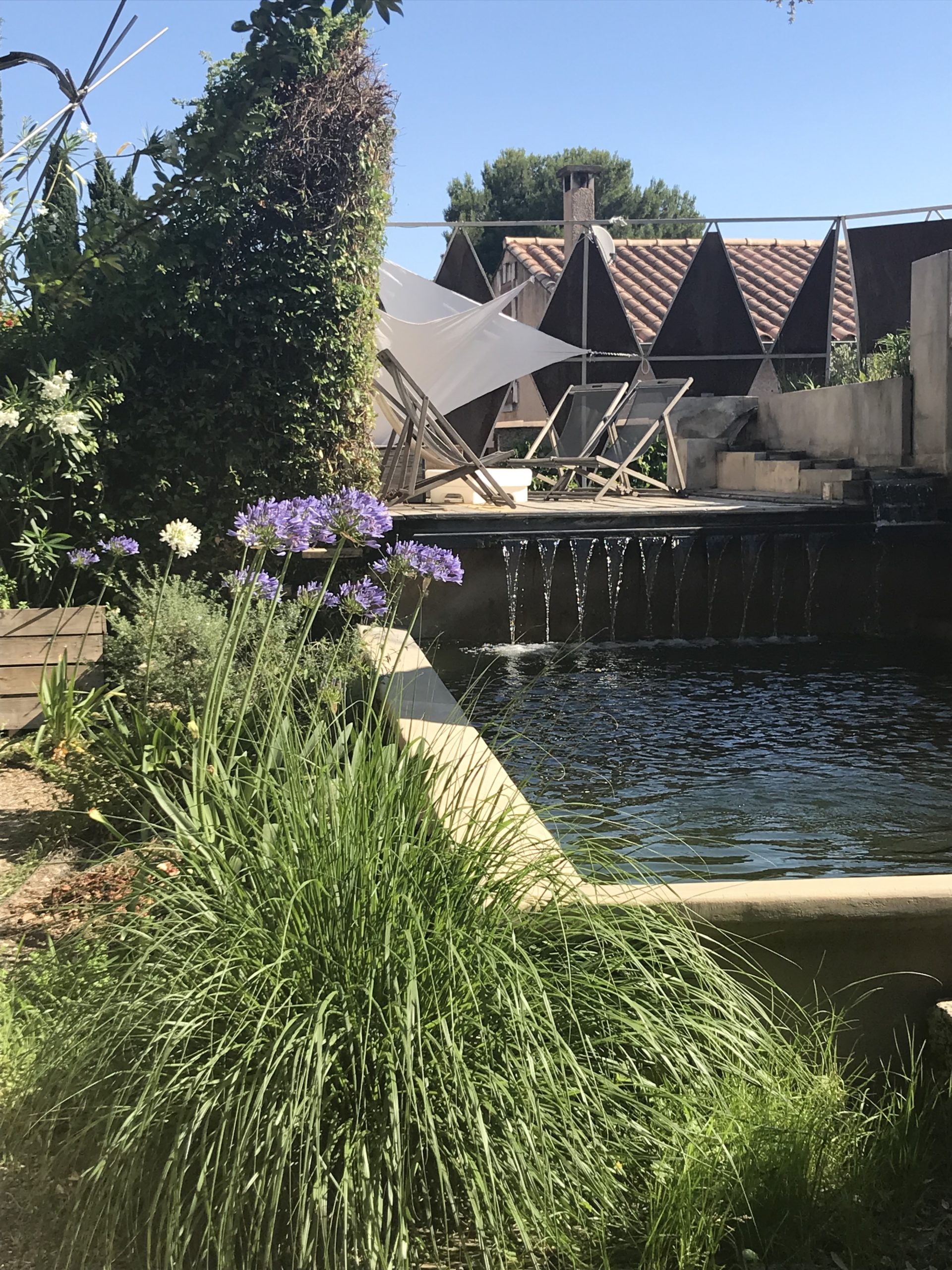 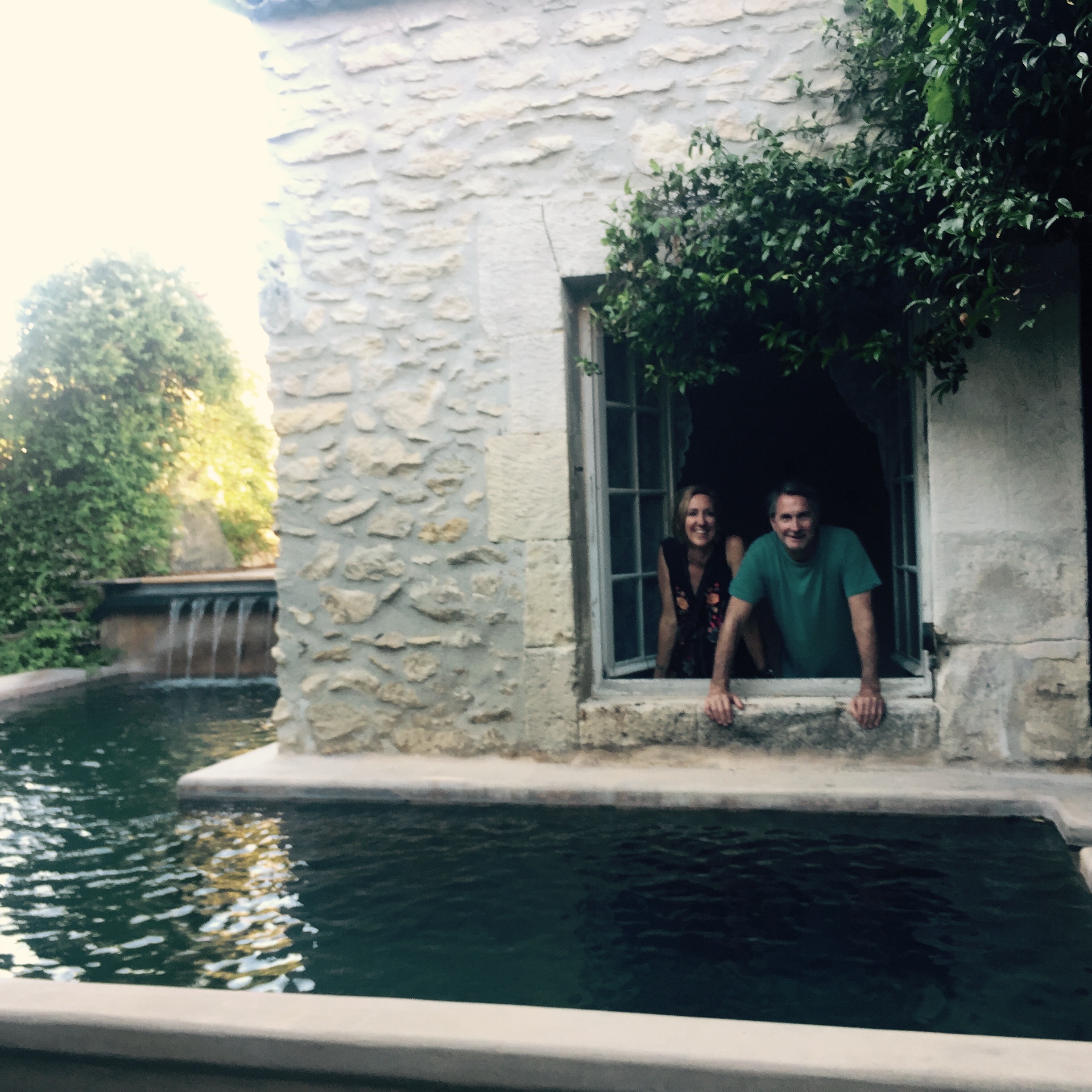 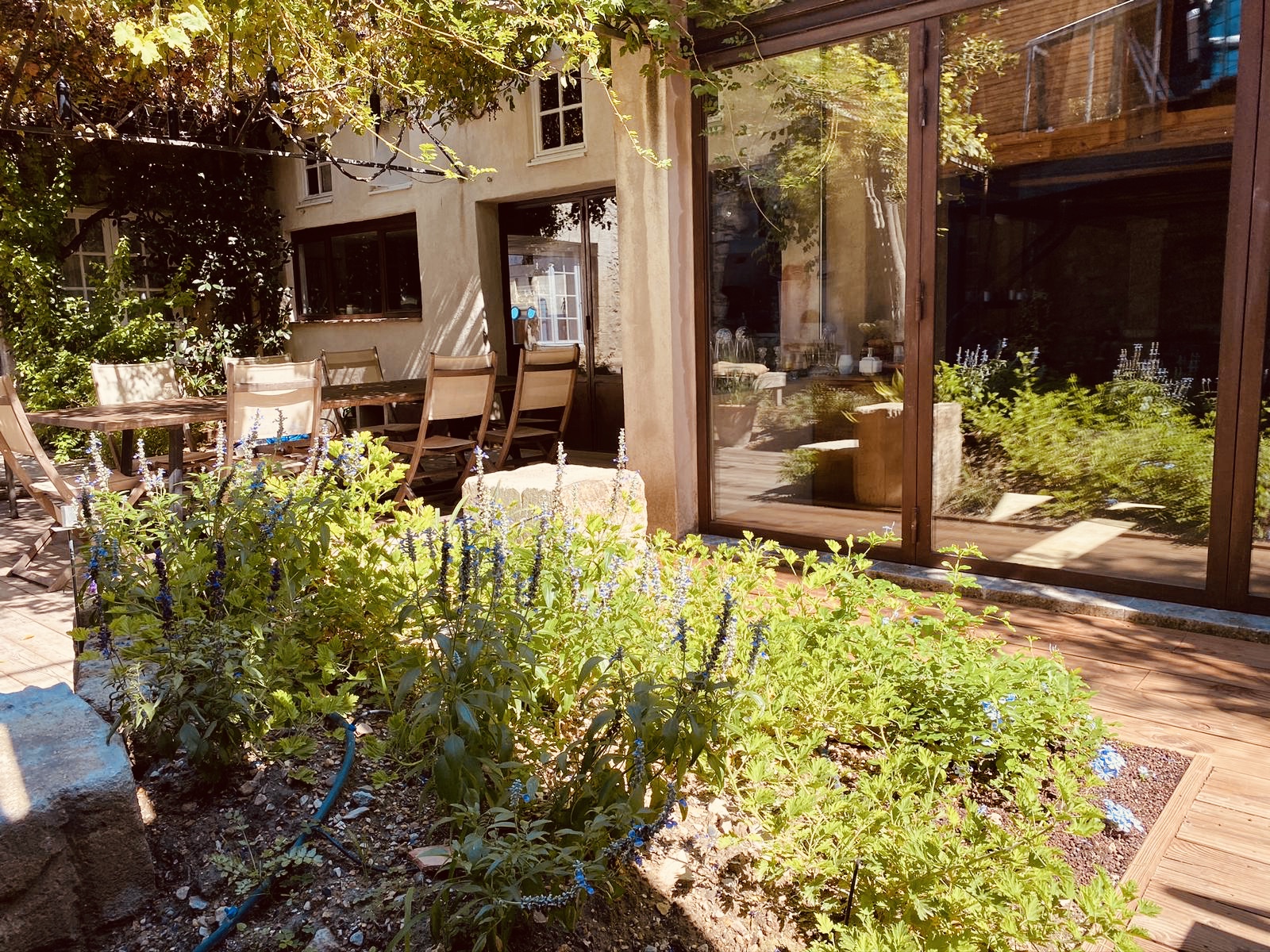 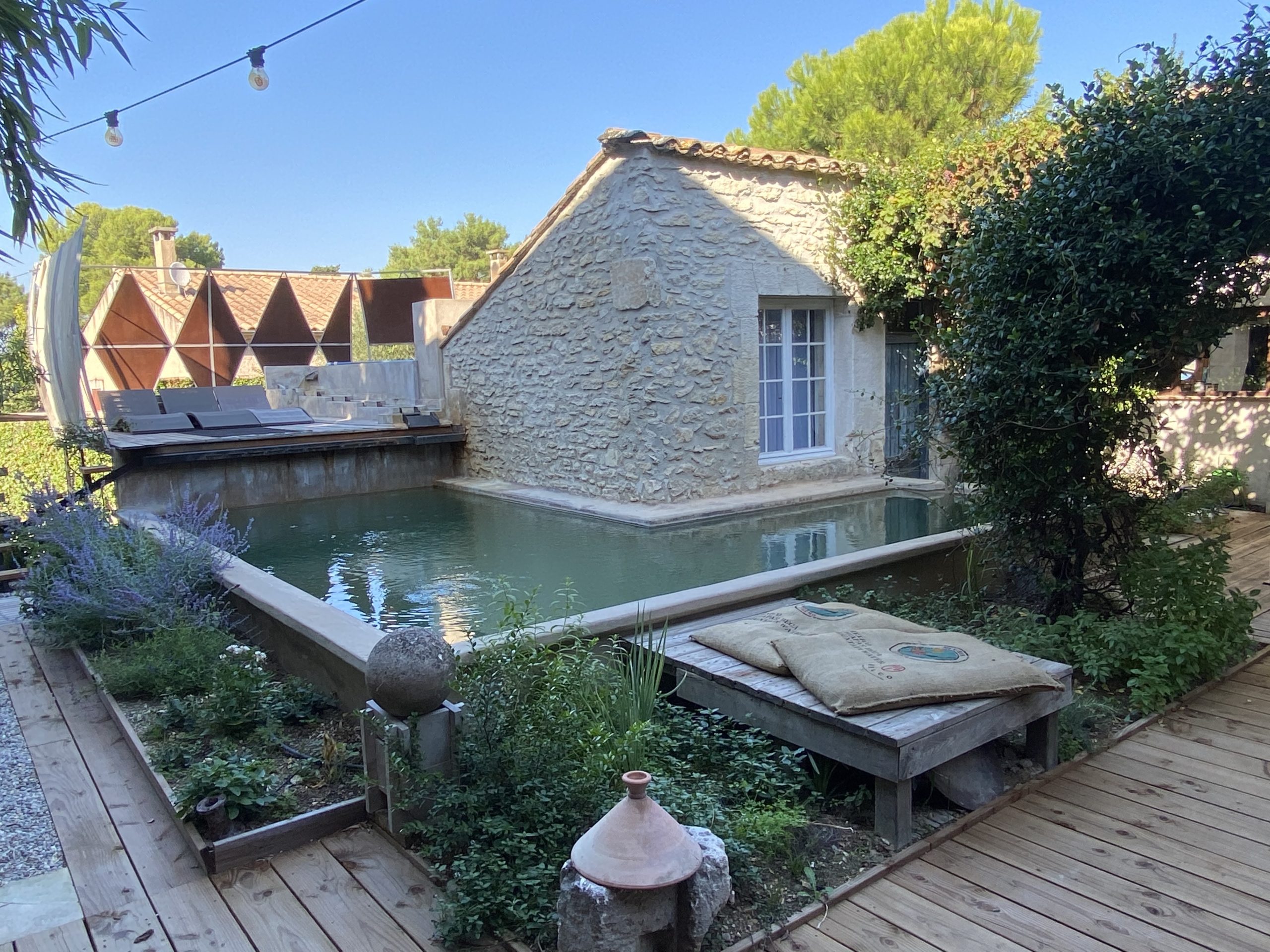 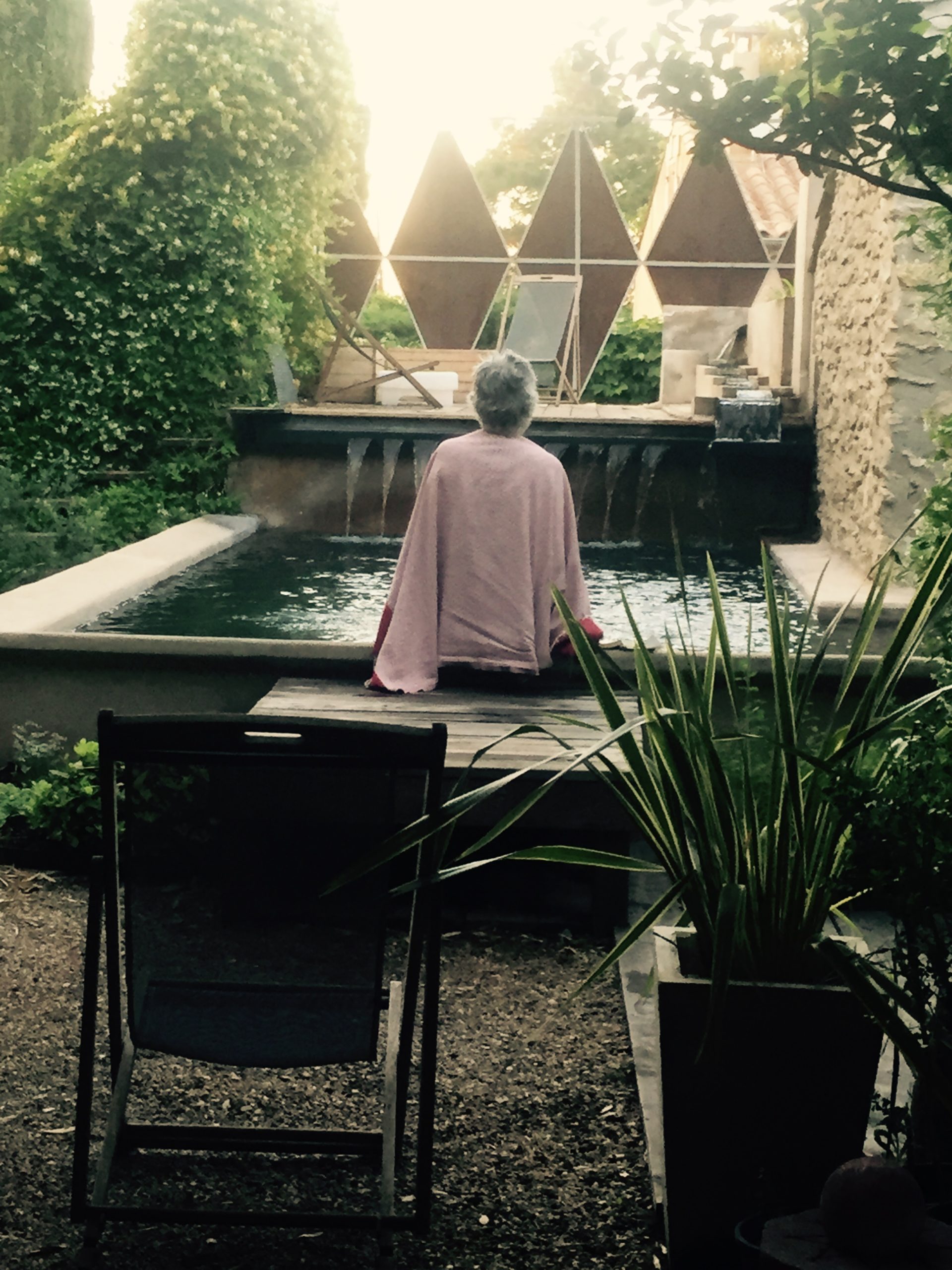 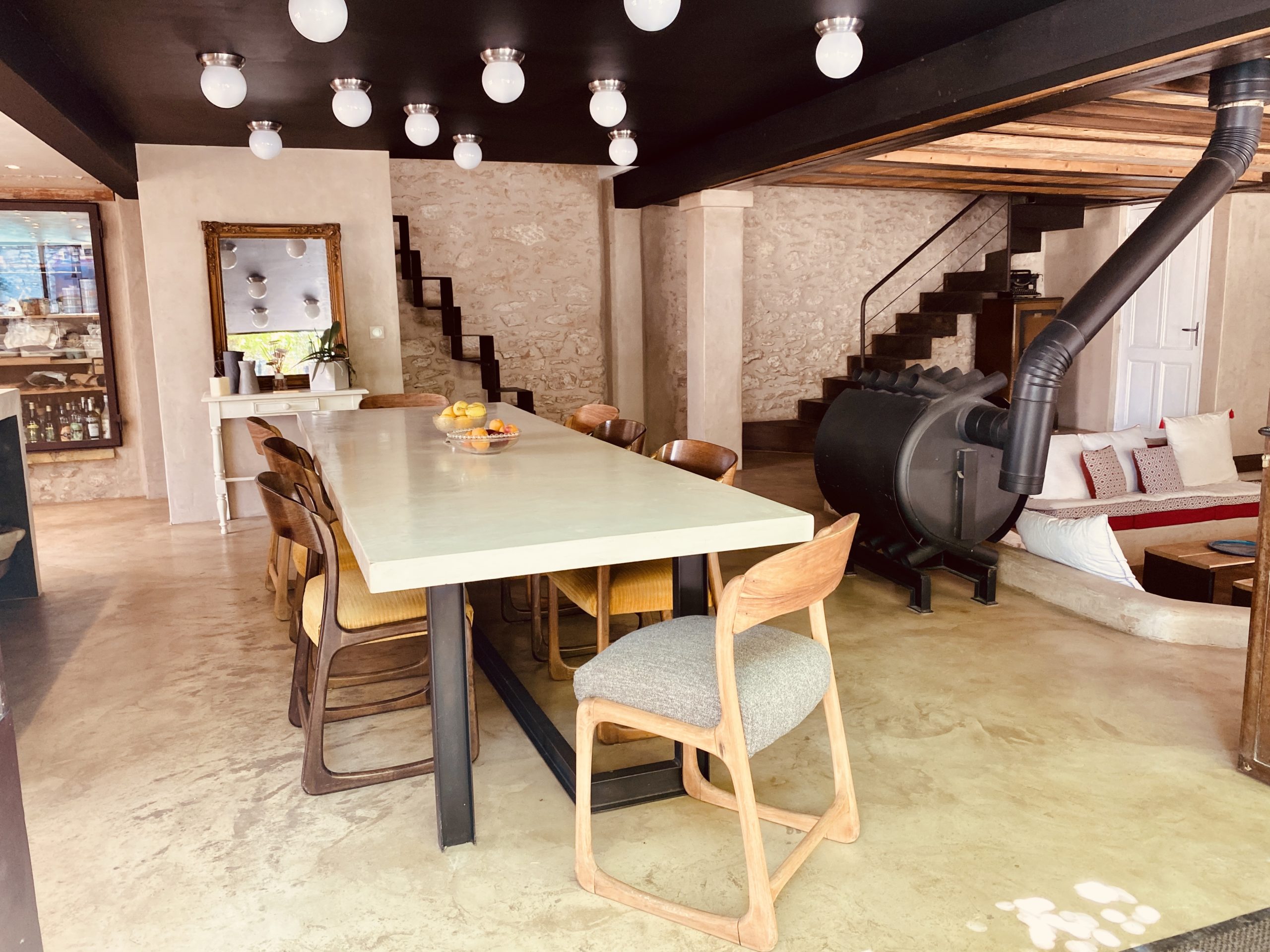 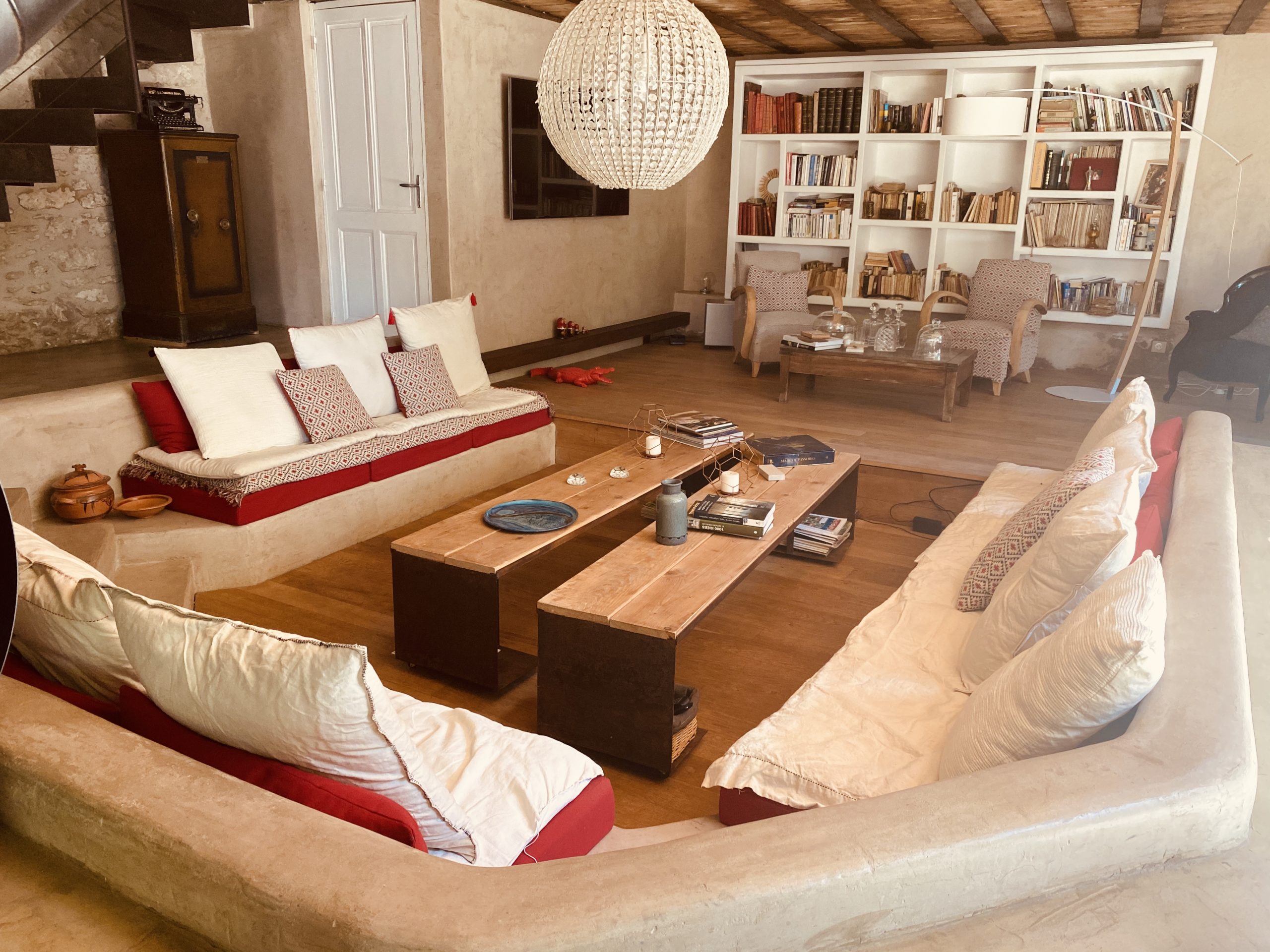 Rental villa with swimming pool St-Rémy-de-Provence : description of the house

Rent house with pool: 350m² of calm for holidaymakers

Our 350 m² house with swimming pool is situated on an atypical 600 m² property. Sarah and Marc like to think of their Provençal farmhouse in the Sans Souci district as a very quiet oasis. A place of rest in which a pool with natural water is offered to the bathers, as well as a garden of scents and colours, straight out of the imagination and the green thumb of Marc.

This loft-style house has large windows opening onto the garden. The decoration is particularly well done, moving easily from one style to another, depending on where you wander.

On the garden level, you will enjoy a spacious open-plan living area of 130 m², including a fully equipped kitchen with professional equipment, a dining room with a large table (made from standard materials and an IPN steel base designed by Sarah), a living room with benches, a relaxation and reading area, an office, a glass roof, an independent toilet and a bathroom with a walk-in shower and toilet.

A property of 600m² not overlooked

The main entrance to the house is through the glass roof. But there is another entrance: it is discovered later and leads directly into the garden created from scratch by Marc Féraud. Sublimated by a proliferation of Melissa associated with Mint, Myrthes which rub shoulders with Agapanthus raising their white and blue inflorescences towards the fragrant Jasmine which invades the arbour and the fence… All the way to the solarium of the swimming pool, which is reached by a staircase designed and created by Marc, which climbs between the many small white flowers with pink hearts of the Abelia and the Plumbago with their sky-blue umbels inserted against a natural waterfall which overflows from the water garden. A wooden walkway also spans other waterfalls emerging from the pool, up to the cart-blue door of the 18m² room, which, like an outbuilding, has its feet in the garden and the pool.

Holidaymakers in our house with swimming pool in Saint Rémy de Provence can enjoy different areas in the garden:

Marc, a professional landscaper, has created a real Provencal haven for families and groups of friends wishing to rent a villa with a pool in Provence!

a villa with swimming pool, formerly a farm outbuilding of the Féraud family

A villa with a swimming pool, once a farm dependency of the Féraud family

If you type in “villa with pool St Rémy de Provence” on Google, you can expect to find all sorts of houses to rent in St Rémy. The very modern building or the old Provencal farmhouse for example. Here, at M&S, we have a mixture of both… Because if the establishment is today this atypical house, it was once an 18th century agricultural outbuilding where the owner of the “Domaine Sans Souci” stored the hay…

A family property for over a century

The story begins in the 1920s, when Marc Féraud’s maternal grandfather, Louis DOR, married Hélène Crousnillon, who was to become the “Mémé Dor” of all their descendants. At the time, in bourgeois families (the one of Marc’s grandmother), children were bought an estate or a house when they got married. They therefore bought a farmhouse, the “Domaine Sans Souci” (the district is now called the Sans Souci district).

Although the district is now made up of several houses, there were once meadows in their place. And among the buildings of the estate, there was a hayloft. Further on, in another building, today the property of one of Marc’s brothers, there was a stable in which the height of the troughs presumably was for cows, the breeding of which was not very common in Provence because of the summer heat.

The hayloft transformed by Louis DOR

Louis Dor transformed the place for his commercial needs. At the beginning of the 20th century, the people of Saint-Rémois did not yet have electricity in the countryside. Pépé DOR then invested in the sale of oil to enable people in the countryside to light up. He installed galvanised wooden tanks inside (which Marc dismantled in 1980) and installed a hand pump (now recovered by Marc’s younger brother), the fixings of which can be seen on a pillar near Marc & Sarah’s bookcase. For several decades, the inhabitants of Saint Rémy de Provence came here to fill their jerry cans.

During Marc Feraud’s childhood, the present house with swimming pool in St-Rémy-de-Provence was a shed under which he played with his brothers and cousins. The room “feet in the pool” was a henhouse where Marc would come to collect the eggs, hot and fresh, to be “gobbled” on the spot. And the large space where the kitchen, dining room and living room are today, was used as a warehouse for storing all sorts of materials. But also as a garage for the 1936 Hotchkiss Cabourg 680 (which no longer worked and in which Marc played the dandy in scenarios that he imagined in his overflowing mind) and the 1952 Citroën Traction Avant of Grandpa DOR, which is still running in 2021!

For the record, the old safe that Marc inherited and that sits proudly above the living room, was once used by his grandmother when she had to pay her employees. It was always open. Inside, there were rusty tins, each filled with the cash due to the gardener, the seamstress, the cleaning lady and even gifts for the grandchildren. Marc continues to bathe in all these memories today, feeds on them to live his present life with Sarah and takes pleasure in telling the stories…

In the 1980s, Marc tells his grandmother that he is starting a business and wants to rent the place. Granny Dor agreed! So he moves into the middle of the “old wood” that his grandmother has been storing for years. And when his grandson told him that he wanted to move or throw away all this worm-eaten wood, his grandmother replied: “You don’t realise that if one day there is a war, you’ll be very happy to find it!

In 1980, Marc set up his own business. But it was in 1997 (when he was living next door), as if called by this family building where so many childhood memories still float, that he moved all the materials and equipment that were in the warehouse elsewhere, and then built a living space in the same place where the kitchen, dining room and his bedroom with bathroom are today. He settled there with his son and felt at home from the start. Only a few close friends and family members come over sometimes. Marc lives there, in what he has called “l’Atelier”, where he leads a discreet life in the heart of the centre of Saint Rémy.

Marc meets Sarah: M&S is on the move

In 2004, Marc had the good fortune to meet Sarah at a vernissage in Saint Rémy. 4 years later, the couple decided to start major work to make this place, little by little, THEIR HOME. Rooms and lounges appear year after year and the decoration grows according to Sarah’s ingenious ideas. In fact, since 2008, the couple has never stopped innovating and transforming this place. To the point of giving it yet another life in 2015: that of becoming a bed and breakfast / chambre d’hôte!

Book your stay in Provence

Two parking spaces inside. Three private spaces at the beginning of our road

Ideally located 300 metres from the town centre on foot 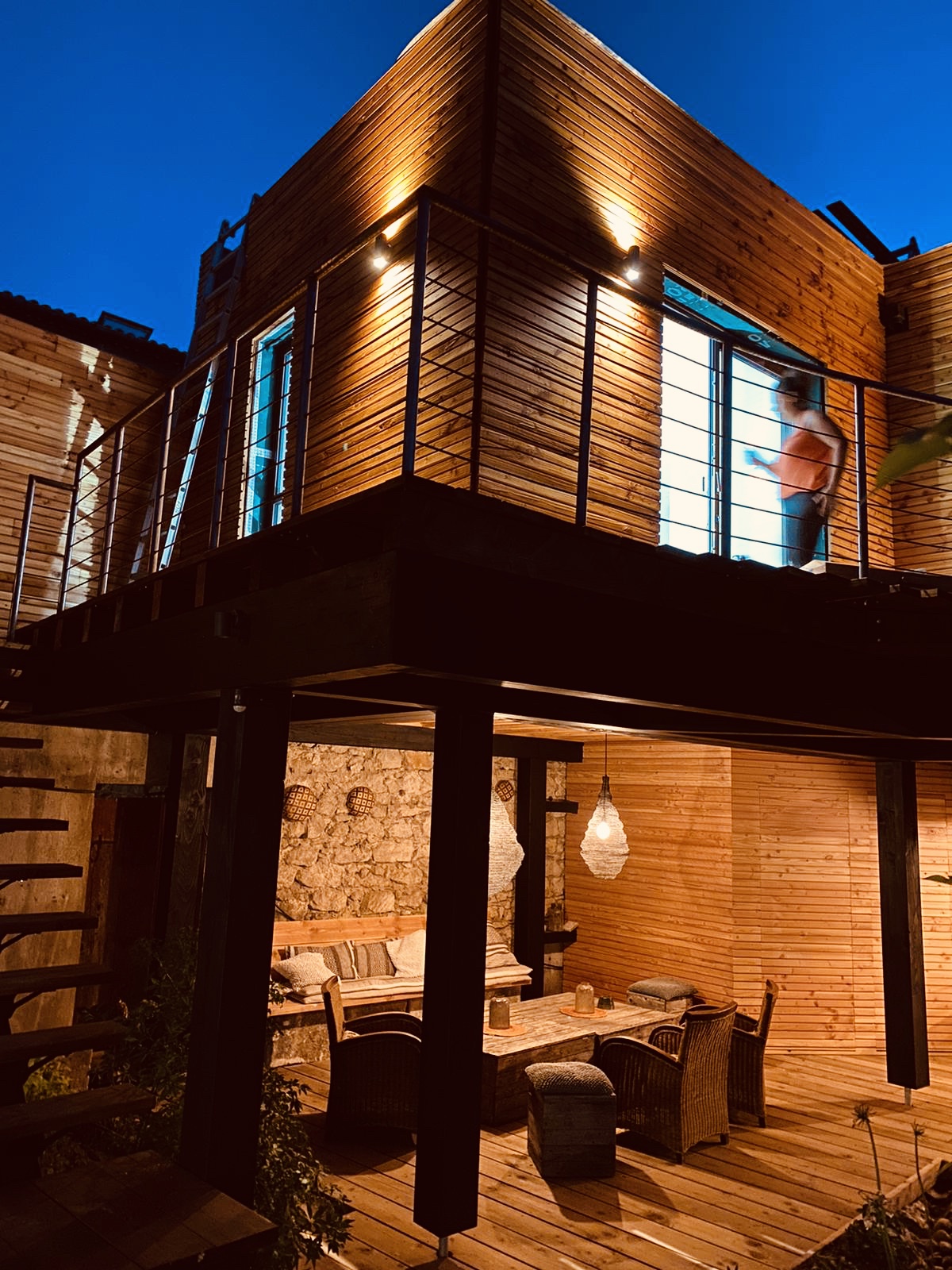 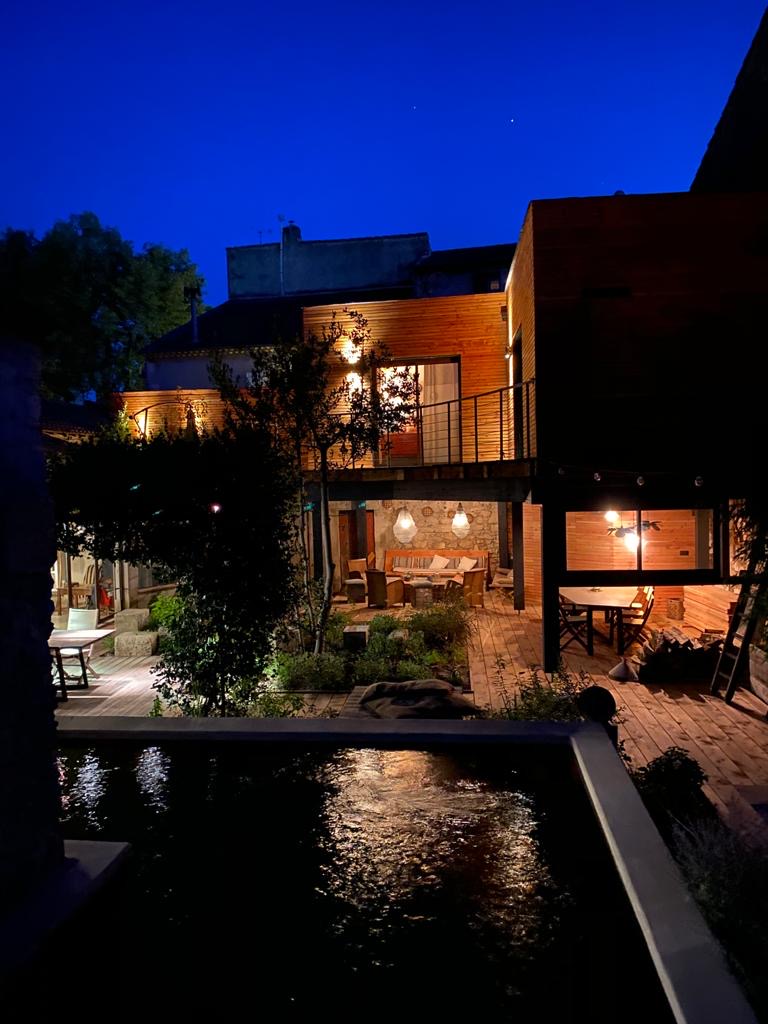 Check in / Check out

We will welcome you from 5pm.

Departures should be scheduled no later than 10:00 a.m.